Get 5% off your purchases at Metcalfe's and support your neighborhood at the same time!

Our association has partnered with Metcalfe's Markets for the month of May. All month, when
you checkout at either Metcalfe's location with our special barcode, you'll get 5% off your bill.
At the end of the month, Metcalfe's will add up all the savings and donate that amount to our
neighborhood association.

We're thrilled to be a part of this program, and glad that we can raise money for all the great
things our neighborhood association does while helping you save money at the same time.

You can download the pdf file, Another Helping Midvale Heights, using this link.


Midvale Heights: 'I can't think of another place I'd like to live' 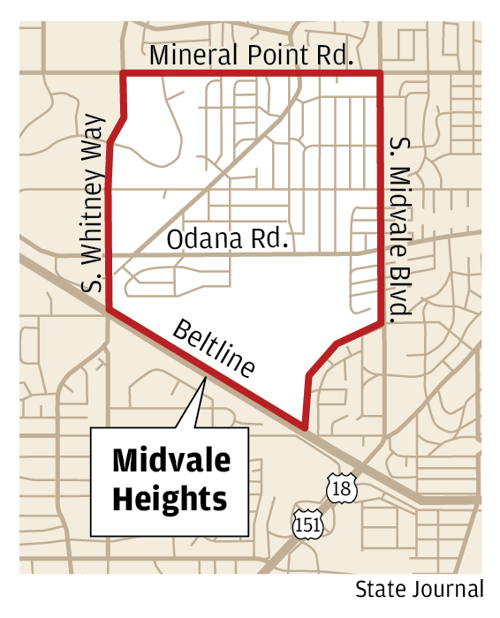 The thing that gets everyone’s attention, as they approach the Midvale Heights neighborhood from the south along Midvale Boulevard, are the bison.

Not real ones, though it’s possible that hundreds of years ago, some trod the spot where their concrete cousins now perch.

The spot, called Bison Prairie Gateway, was built by the neighborhood as a reminder of what occupied the land where mostly ranch and split-level homes now stand.

Much of it was oak savanna. Later on, a good chunk was farmland owned since the mid-19th century by the Piper family. The Pipers also owned businesses in central Madison that included hotels, restaurants and vehicle dealerships, and they built the 11-story Belmont Hotel on the Capitol Square, owned since 1968 by the YWCA.

Houses began going up in 1947, and the area was soon annexed to the city of Madison. New developments steadily added homes to the neighborhood until 1970, and University Research Park plats were added in 1984 and 1988.

Jean Sweet came to the neighborhood in 1953. After World War II, the local housing market was tight. A house on Piper Drive that she and her husband Charles had their hearts set on — which had a living room window that looked toward the Capitol, at the time still visible in the distance — had been snapped up.

But soon they connected with a young builder who owned three lots on Woodside Terrace, she said, and they had their home. In those days, there was still a wooded area and a cow pasture nearby, and Midvale Boulevard was a dirt road.

“We had no vision for what this was going to be,” Sweet said. “But a lot of people did. So, Midvale Heights was what happened.”

The Sweets were drawn to Midvale Heights from Madison’s East Side, looking for a house that had a yard for their daughter, who would soon be joined by a brother. Charles Sweet died three years ago, but Jean Sweet, now 91, still lives in the home.

“I still live here because I love the neighborhood,” she said. “I love my home, always have. I can’t think of another place I’d like to live.”

It was a similar story for Ed Rogers nearly 60 years later. He and his wife, Sarah, were renting on the East Side, but about 4½ years ago started looking for a house that had a yard for children to play in. After searching other neighborhoods, they found their house on Tocora Lane.

“I’m infatuated with the neighborhood,” Rogers said. “I just love it.”

Rogers soon became active in the Midvale Heights Community Association, and since January has been its president. He said the neighborhood has a great mix of younger couples with children, empty nesters and some like Sweet who have been in their homes since they were built.

Interactive map to the Garage Sales

All events are at Westmorland Park & sponsored by the Midvale Heights, Sunset Village & Westmorland Neighborhood Associations—rain or shine!


Follow the 4th of July link in the menu, or this link, to find out about the 4th of July Celebration at Westmorland Park. There are also volunteer opportunities to help out with the event.

The Midvale Heights Community Association has started it's 2016 Membership Drive


Every household in Midvale Heights will have a Membership Messenger with the 2016 MHCA registraion form, delivered by their Block Captain.

You also have the option of registering online (click on the Read More for the online registration link).

The MHCA Directors meet from 6:45 PM to 8:45 PM on the fourth Tuesday of each month, except in December and July.

The meetings are held at the Sequoya Public Library, 4340 Tokay Boulevard.

The meetings are free and open to the public.

Each year, Santa Claus will be visiting Midvale Heights on the Thursday evening before the week of Christmas.

Santa has agreed to stop at homes throughout our neighborhood, bringing early Christmas wishes to neighborhood children and their families.

Given his very busy December schedule, Santa has asked us to help him with his travel arrangements. If you would like Santa to visit your home, please contact or 608-622-5388 and his elves will discuss the details with you! Please make sure to contact the elves before December 16th or they will be too busy to make the arrangements.


Santa is very busy this time of year and he's looking for volunteers to help him during his visit. Jolly men are particularly welcome, but there are many small ways to volunteer for this special event. If you have volunteered in the past, you know how much fun it is. If you know someone who fits the bill, please encourage them to contact or 608-622-5388.

by Janice Gary
On Sunday, August 19, the MHCA will celebrate the 10th anniversary of the original planting and development of the Bison Prairie Gateway with an ice cream social at the Prairie on South Midvale Blvd. The event is planned for 3 to 5 p.m., and everyone in the neighborhood is invited. MHCA members will bake special bison cookies, and there will be ice cream and refreshments. Rain date will be on Sunday, August 26.

Some of the original planners of the Prairie site will be on hand to tell the story of its development. Beginning with the bison sculptures and a sundial, the site has grown to include beds of a variety of wild flowers, a rain garden, and most recently, a prairie flower sampler. In 2010, the MHCA installed an informational plaque on the site that explained its origins and asked readers to identify some of the wild flowers in the gardens. Repair work on the bison sculptures has begun, and they should be cleaned up and ready for the ice cream social.

Event planners also hope to include local musicians in the program. Bring your friends and a lawn chair and join the MHCA in celebrating 10 years of a local landmark.

We are still looking for a few volunteers to prepare for the event. Anyone who would like to help out can contact Denise Lamb at 233-3755 or .

The July-August 2011 Midvale Messenger has been published and distributed by the Area Directors to their Block Captains for delivery to each residence in Midvale Heights.

No records to display


Why should I donate?